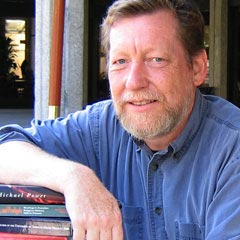 Since 2015, he has taught advanced undergraduate research seminars in which students have gained practical experience using routinely generated records to track down survivors of the 1,490 and locate their places of settlement in British North America and the United States.  The students have presented their findings, along with Professor McGowan, at the Irish Famine Summer School held at the Irish National Famine Museum in Strokestown in 2015 and 2016, and at the “Children and the Great Hunger” conference at Quinnipiac University in 2017. Professor McGowan and his research teams have compiled the following list of the 1,490 Strokestown Famine emigrants and mapped their places of settlement in Canada and the United States. They have also traced the children who were left orphans from the 1,490 Famine emigrants and located where many of them were adopted by French-Canadian families. The list of the Strokestown 1,490 Famine emigrants can be found at this link. The list of the Strokestown 1,490 Irish Famine orphans who were adopted in Canada can be found here. Professor McGowan and his research team have also mapped where the 1,490 Strokestown emigrants and Irish orphans first settled in Canada and the United States. Click on the map images below to view these maps. 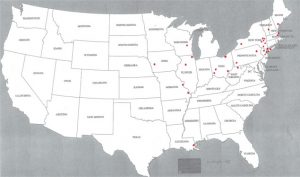 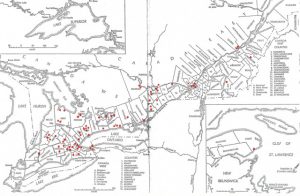 One significant document that Professor McGowan has made use of in compiling the list of the 1,490 is an article published in Freeman’s Journal (29 April 1848) in which Bishop George Browne of Strokestown published a list of tenants evicted from Denis Mahon’s estate. As Ciarán Reilly has noted in  Strokestown and the Great Irish Famine, Bishop Browne provided evidence that “the evictions on the estate since Major Mahon had taken over amounted to 3006 people. This copy of the Freeman’s Journal, 29 April 1848, annotated by the Mahon family, highlights discrepancies where the family disputes the numbers evicted” (103). These pages are held in the Stroketown Park Archive and can be viewed below 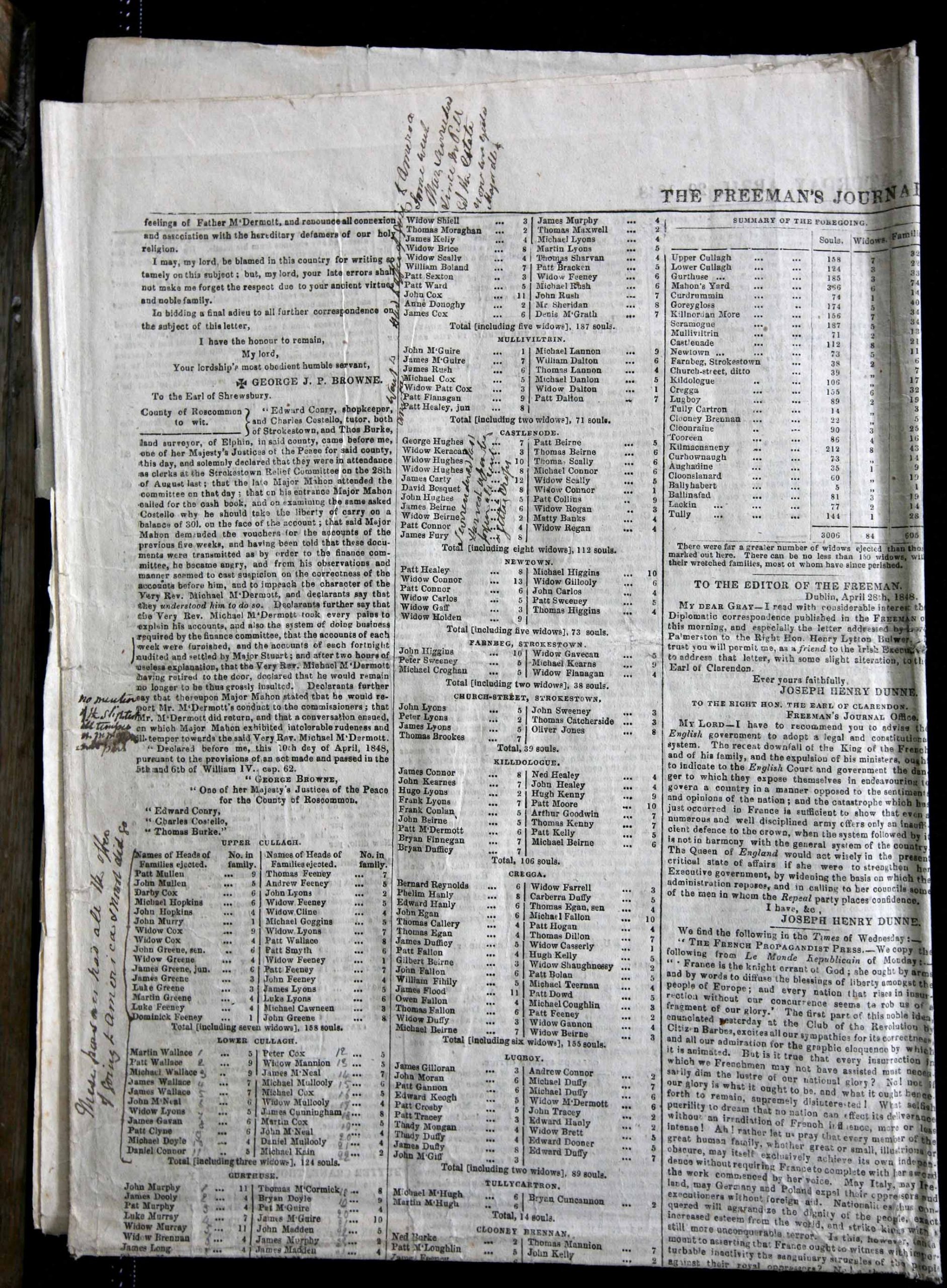 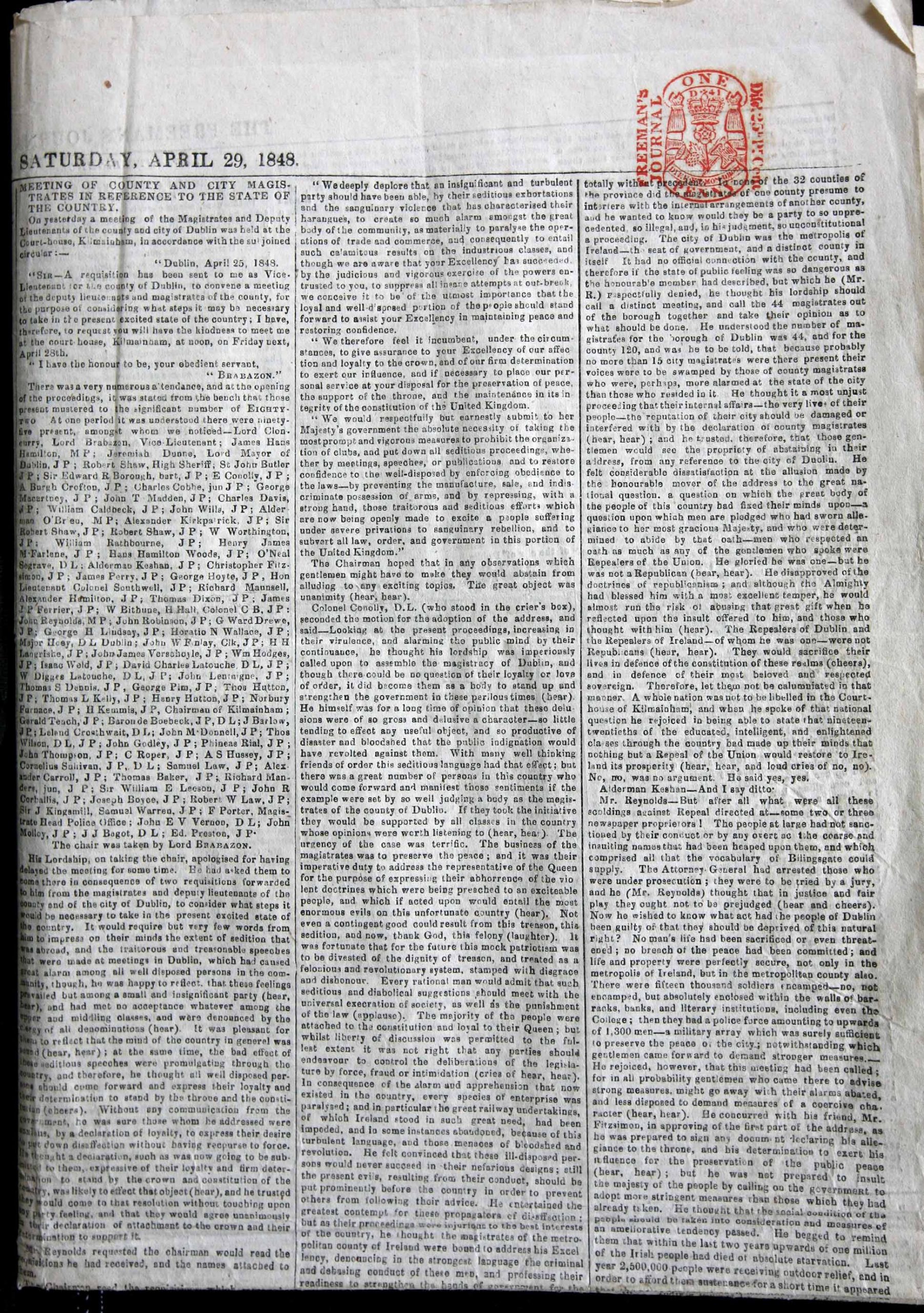 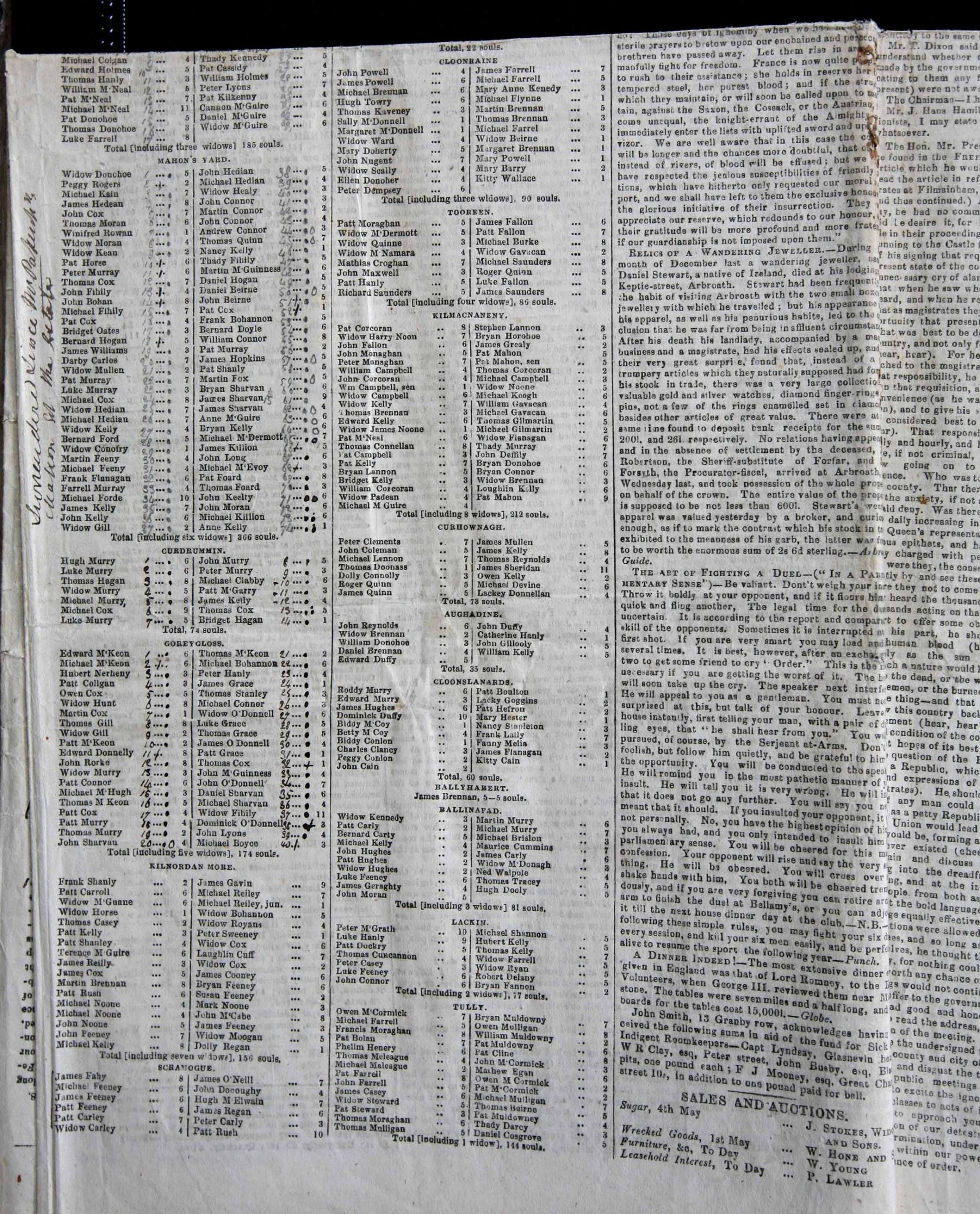 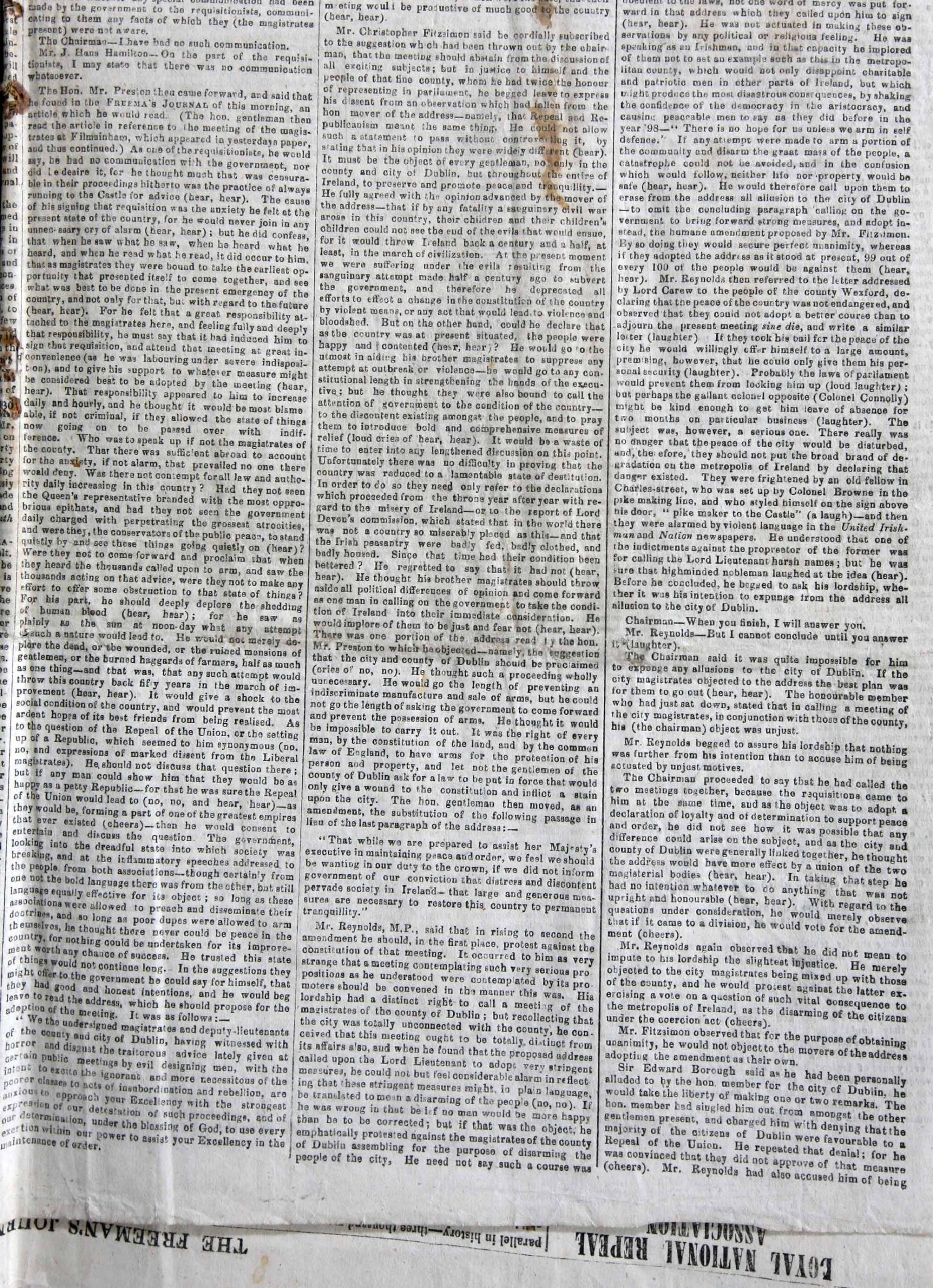 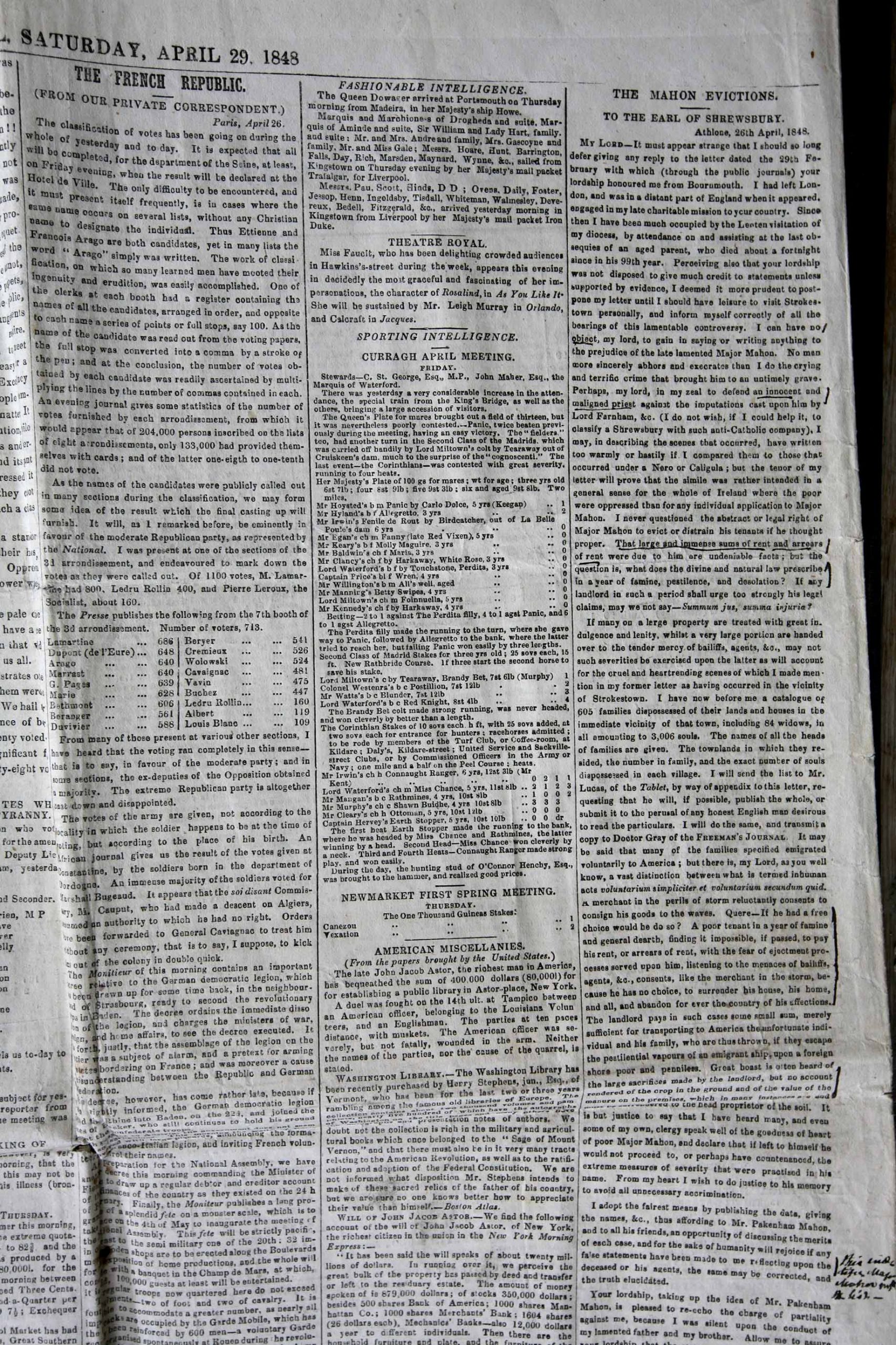 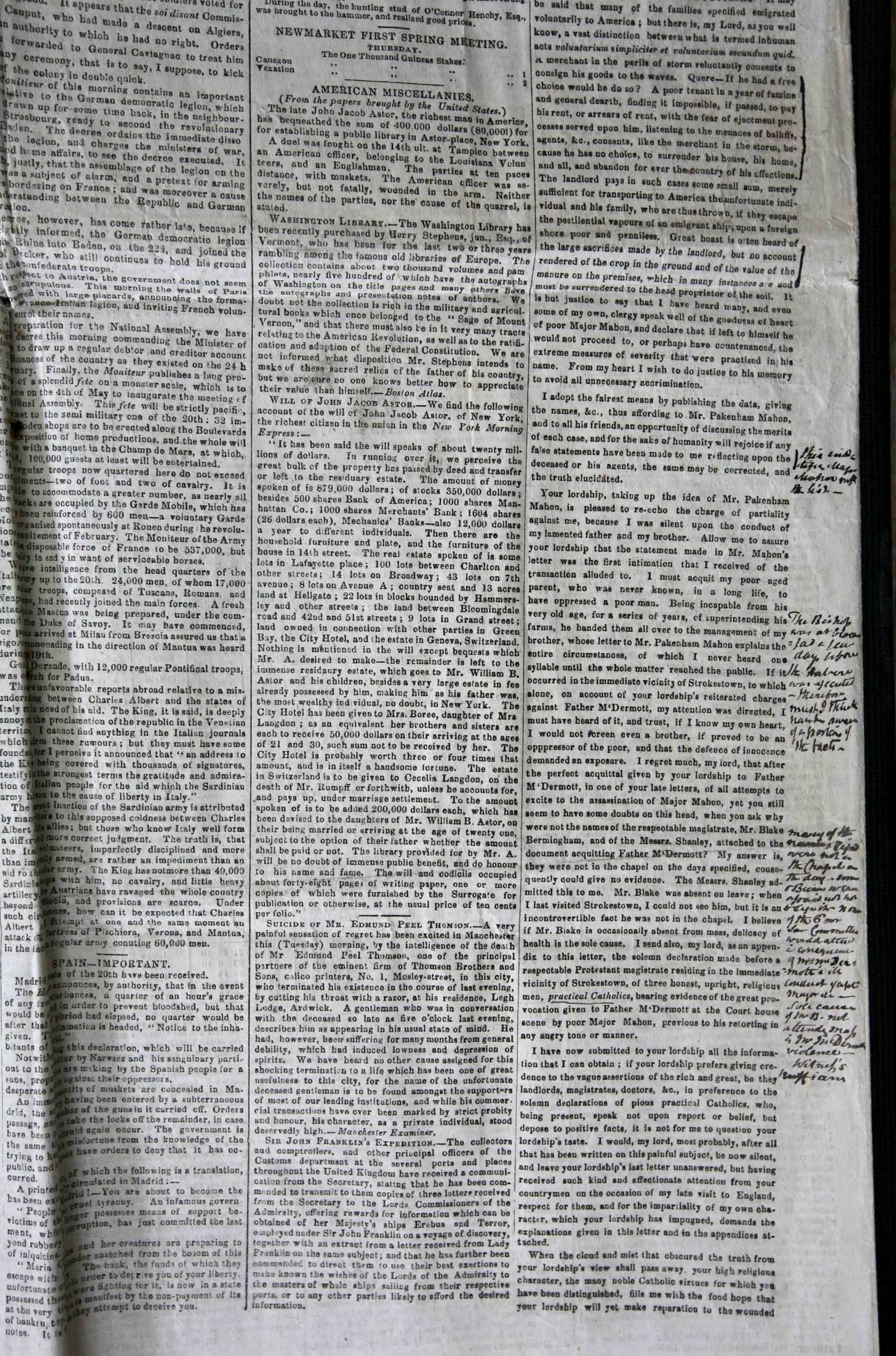 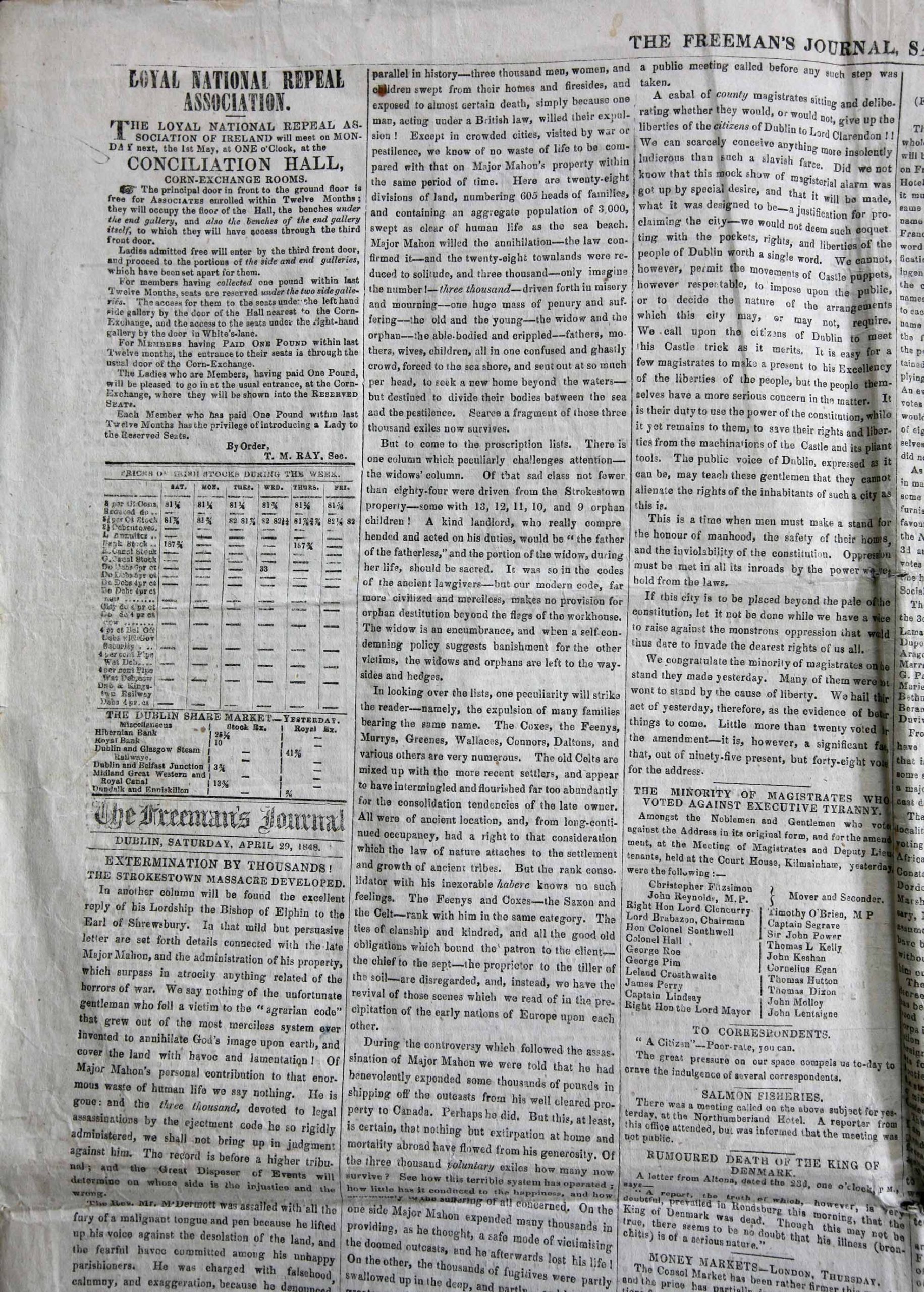 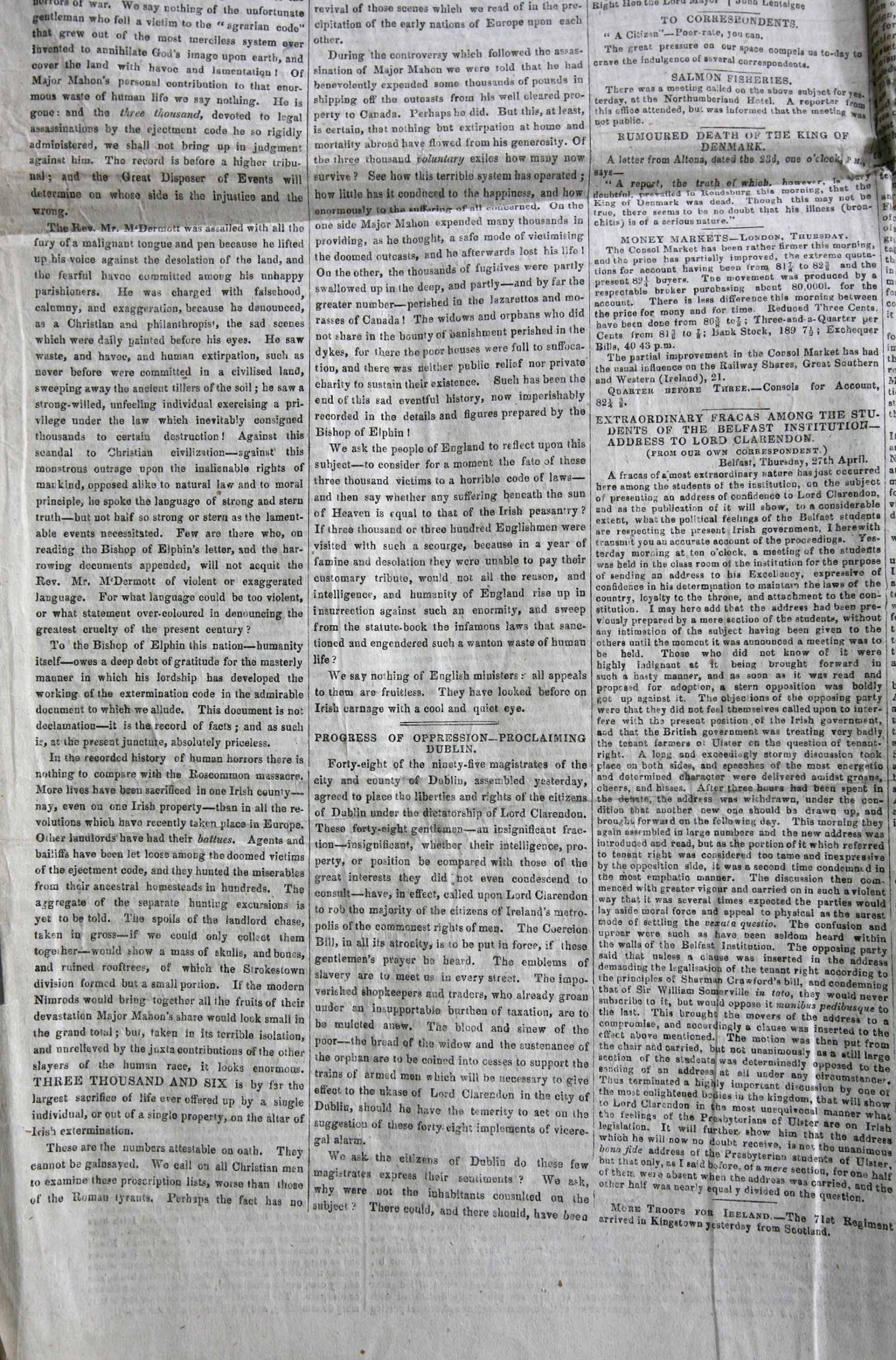 The Strokestown Park Archive collection contains over 55,000 documents and is of international significance in relation to the Famine period and also as a complete record of economic, social and estate history over a 300 year period.
According to Professor McGowan: “The archive at Strokestown Park House is a treasure trove for social historians intent upon reconstructing life on an Irish estate in the eighteenth and nineteenth centuries. Equally important is the rich deposit of records from the Irish Famine period, which when viewed in the context of other collections available to the public in Ireland, ranks as one of vital importance to historians of the Great Hunger. Moreover, manuscripts generated by the Pakenham-Mahon family provide valuable links to other landed families in Ireland and to larger imperial and diasporic networks. Thus the archive is not just of local or Irish interest, but provides potential research projects for scholars across the globe."

An excerpt from the Pakenham-Mahon manuscripts in the Strokestown Famine Archive Collection.

Professor McGowan describes his research teams’ search for the 1,490 in more detail in his article, “Migration, Mobility, and Murder: The Story of the 1,490 Assisted Immigrants, from the Mahon Estate, Strokestown, County Roscommon, 1847,” published online in Breac: A Digital Journal of Irish Studies special issue on “The Great Irish Famine: Global Contexts”, edited by Marguérite Corporaal and Jason King.