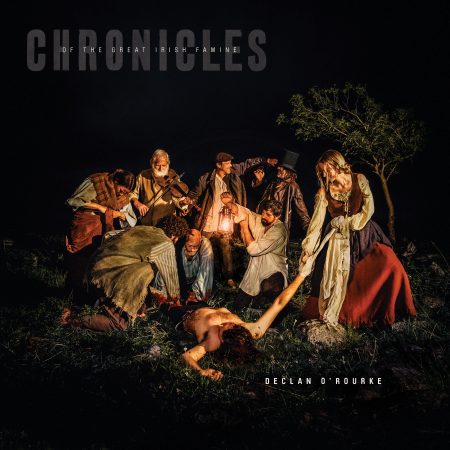 My name is Daniel Tighe. I am 12 years old. In May 1847, the worst year of the Great Irish Famine, I walked this path from Strokestown to Dublin heading for a ship and in hope of a new life in North America. Follow in the footsteps of my story which  is marked by over 30 pairs of Bronze Shoes along the National Famine Way – now a 165 km accredited trail.

We meet more people on the path travelling like us to Leixlip and Louisa Bridge, where there is a Holy Well and Spa.

I never saw the like of it for there is an aqueduct and waterfall and a well where the warm water comes from the ground and people go down to bathe and splash the water on them to cure their ailments. Hawkers sell bottles of water, rags and trinkets.

We waste no money on those.

Mr Robinson ordered us not to stop at the spa, but mother took Bernard Og down to the water with her, for she fears that my brother is sick.

There is a rumour since we left Strokestown that one of the familes is carrying the Fever – everyone is scared of the disease that has carried off so many back home. Sure it’s a big part of what we are fleeing from.

Soon there are women and children and old Luke Murray and Nancy Campbell’s mother Biddy and poor William Dalton who is lame, people making their way there to bathe and there was nothing the bailiff and his men could do about it, though they threaten to send William Dalton and his four children and all those that that cannot walk any further to the workhouse in Celbridge.

Leixlip has two access points: here from Louisa Bridge and the second at the next bridge by Confey, two kilometers further along.  The second is the one we recommend to visit Leixlip. It is 300 m to Confey Shops, 1.1km to Leixlip town.

Leixlip is a  lovely town on the River Liffey, home to Leixlip Castle.  Leixlip Castle is built on a rock at the confluence of the Rivers Liffey and Rye. It was owned by the late Hon. Desmond Guinness, founder of the Irish Georgian Society. Features of interest to be found in the grounds of the castle include the Gothic greenhouse, the temple seat, the gazebo and the gate lodge.

In the 1800s, Leixlip was a prosperous town with an iron works, flour mill and woollen mill.

The windows in the Church of Our Lady’s Nativity were designed by the renowned stained glass artist Harry Clarke in 1925. The statue of Joan of Arc was a gift from the French Ambassador to Ireland.

Nearby Castletown House , Celbridge , County Kildare , is a Palladian country house built in 1722 for William Conolly , the Speaker of the Irish House of Commons . The House and Parkland are opened to the public and run by the Office of Public Works. It is well worth a visit.

This fascinating barn structure was built in 1743 on the Leixlip side of the Castletown Estate.

Several purposes are suggested for this unique structure:

The barn was built in the years immediately following the famine of 1740-41, as there was a need for new grain stores in case of another famine. The construction project also likely served as a way to keep the local poor employed. In this, it is not unlike the Connolly Folly (an Obelisk), which was built on the estate in 1740-41.

A similar structure known as the Bottle Tower, built in imitation of the Wonderful Barn, is located in Churchtown, Dublin.

Louisa Bridge, where the Bronze Shoes are located,  is the only bridge on the canal named after a woman. The lady in question was Louisa Connolly, wife of Thomas Connolly of nearby Castletown House, who was also a Royal Canal Director. Other directors who had bridges named after them, on this section, were Robert Deey, William Pike, Joseph Mullen and James Bond.

Leixlip Spa is alongside the Shoes at this location. It is well worth a short diversion. The spa was unearthed by workmen digging the canal in 1793. Newspapers of the time gave graphic descriptions of how the event happened: ‘hot water immediately issued in a narrow perpendicular stream from the bottom of the bed, to the astonishment and alarm of a labourer with whose naked leg it came into contact.’

Although reputedly there was a Holy Well on this site prior to this discovery.

The Royal Canal Company re-routed the warm spring to the side of the aqueduct, into a shallow hexagonal shaped pond, and from here it flowed down the side of the valley to a brick basin. This was used as a bath when the spa was a popular visiting place, particularly by the poor of Dubin, on Sunday afternoons in the late eighteenth century. Both are still clearly visible.

It is recorded that on a Sunday between 6 am and 5 pm in August 1794 that 55 coaches, 29 post chaises, 25 noddies, 82 jaunting cars, 20 jigs, 6 open landaus, 21 common cars and 450 horsemen and a sizeable number of  pedestrians visited the spa. A large crowd by anyone’s standards.

Its popularity was such that the Rt Hon Thomas Connolly, on whose land the spa was discovered, intended to build a pumphouse and a hotel, but he died before the work could commence.

The area around the spa is considered an important amenity area because of its ecological, historical and archaeological interest. The plant life is varied and beautiful.

A little further along the canal is a small staging house with a path down to the waterfall, again a short and pleasant diversion.

“Famine Times” In the Autumn of 1846 and again in 47 a blight came on the entire potato crop of Ireland thus causing the dreadful famine. The year is spoken of to day as “Black 47”.

The potatoes rotted in the pits. What misery must it have been, for in those days the people lived solely on potatoes. Here and there at Government depots people were provided with a very small amount of maize or Indian meal.

The Government made a relief plan to provide work for the destitute. They built bridges and other monuments. In this locality a short distance from Maynooth can be seen a mighty tower it is known as the Obelisk. It was built during that disastrous period.

This was told to me by my father. Thomas Cox. Station Road Leixlip 17th October 1938. 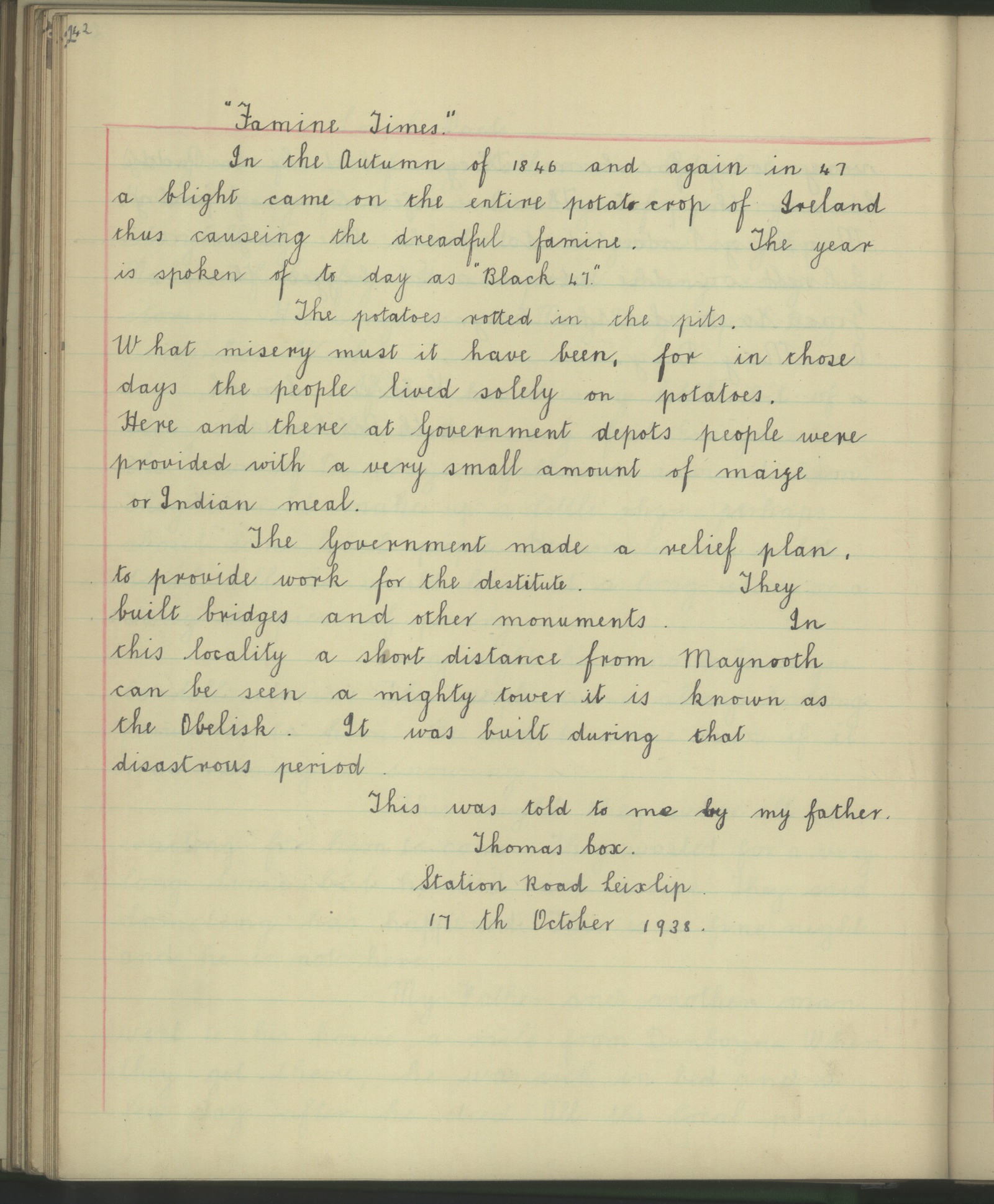