Bailiff Robinson says that we are not walking fast enough and tells us that we all must hasten our pace.

‘We have small children and babies and the legs are already walked off them,’ Mother and the other women protest.

‘There are 10 of us,’ James Flood Snr muttered, ‘and the Sheridans have twelve !’

‘They need to rest more,’ Uncle William pleads with Robinson, ‘for some are growing weak.’

The Bailiff nods and orders the men and older boys to help the women and children.

This long stretch of the canal is beautiful and peaceful and soon we come to the spur that heads off and leads to Longford Harbour and town, but John Coleman tells us of a passenger boat that went down in Longford Harbour near here only a year or two ago. Sixteen passengers that could not escape and get off the boat were drowned in these so called stilly waters.

‘What a terrible way to die,’ murmurs Thomas Feeney as we move on.

Longford, the bustling county town, is noted for its neoclassical Cathedral on which work began in the early 1840s. An 8.5 km branch of the Royal Canal ran from here to Longford town. Before and during the Famine, many emigrants travelled by canal from Longford and the surrounding region to Dublin, from where they made the journey overseas.

Longford Harbour was the scene of a tragic accident on 3 March 1845 when a passenger boat sank. Seven passengers died. They were:

Catherine Mulherne, aged about 32 and her child of about 6 weeks old;

As famine conditions worsened in the spring of 1846, a depot for grain (maize or so-called ‘Indian meal’) was opened beside the canal in Longford. It operated for several months and served the surrounding region. The Longford Journal reported on 28 March 1846 that 574 bags, each weighing 20 stones, had arrived from Dublin. On 20 June, the Journal noted that in the previous fortnight, a total of 50 tons were dispatched to various places: Carrick-on-Shannon, County Leitrim; Castlerea, Strokestown, Roscommon, Athleague, Roosky and Elphin, all in County Roscommon; and Granard and Kenagh, County Longford. Undoubtedly, grain was carried by canal boat where possible.

The effects of the Famine in the Killashee area were severe and are best illustrated by reference to the figures available for the soup kitchen that served Killashee Electoral Division. Open from 3 May to 12 September 1847, the highest number of people it served on any one day was 1,873 or 42% of the 1841 population of 4,491. At its closure, it was serving 33% of the population, which was one of the highest totals in Longford Poor Law Union at that time.

No amenities nearby until Killashee. 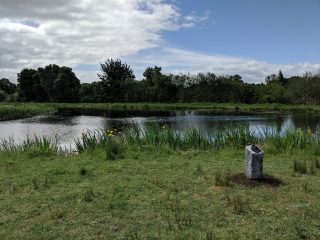