We crossed another bridge near Ballybranigan Harbour with its big canal warehouse and ticket office.

There was a line of people waiting to buy tickets for the barges and boats that would transport them all the way to Dublin. Some, like us, were going on to Liverpool and then bound for Canada and the United States.

‘No walking for the likes of them,’ mother said angrily as, despite our tiredness, we were told to hasten our pace.

My stomach was hungry for we had only eaten the oatcakes the men had given us. We were all famished with the hunger for we had so little to eat. Yet all around us there were carts laden with food, and shops and stores and markets.

The big warehouse ahead was heavily guarded, the soldiers ordering us to move on.

‘Look at those brave soldiers with their guns, guarding the huge stacks of food and grain they have stored there,’ Bridget Brennan shouted out at them, ‘while we must walk on with empty bellies’ .

Further on I see a man in a field blood letting a cow’s leg and drinking some of the blood and collecting some, undoubtedly to bring home and mix with the Indian meal. Something I had seen many times around Strokestown.

The restored passage-boat ticket office by the Bronze Shoes is well worth a visit (check opening hours). A bustling location in Famine times, the derelict ruins from the commercial buildings either side of the Ticket House are clear evidence of this. Ballymahon Town is 1.7km from here.

Ballybranigan Harbour was constructed to serve the nearby market town of Ballymahon. In 1841, the town’s population stood at 2,607. The landlord at the beginning of the Famine was Molyneaux William Shuldham, who died on Christmas Day in 1846. He was succeeded by his son John.

The parish relief committee was formed on 8 June 1846 under the chairmanship of William Ledwith JP, another local landowner. Molyneaux Shuldham contributed £50 to the fund, which was by far the largest sum collected. The Longford Journal reported that Shuldham intended to employ additional labourers during the summer months and to pay them weekly. The second largest subscription to the fund was £20, given by Dr William O’Higgins, the Catholic Bishop of Ardagh and Clonmacnois, who was living in Ballymahon.

An account book, detailing transactions by the Shuldhams in this period, shows how they responded to the crisis. They paid some tenants to give up their properties and emigrate to the USA. One such was ‘Widow’ Murtagh from ‘Branagan’ (Ballybranigan), close to this site, who received £15 on 24 September 1847 to go to America. Other tenants were given rent abatements and in a small number of cases, there were ejectments carried out. The book also shows that in July 1847, ‘Mrs Shuldham’ paid £26 to the relief committee and in February 1848, John Shuldham contributed almost £77 for the ‘employment of the able-bodied poor’ in Ballymahon Electoral Division.

In the Famine period, Ballymahon and its hinterland formed part of Longford Poor Law Union, which was served by the workhouse in Longford town. In the aftermath of the Famine, Ballymahon Poor Law Union was created and a workhouse was built on the outskirts of the town. It opened in 1852 and had capacity for 600 people.

The restored passage-boat ticket office in Ballybrannigan Harbour, near Ballymahon, in County Longford, is a striking site along the National Famine Way. Before the Great Hunger, over 40,000 passengers were carried per annum on the canal and the tonnage of goods rose to a peak of 100,000 tons in the 1840s.  It is a fitting place to reflect on the Strokestown 1,490 emigrants and multitude of others who passed this way while travelling on the Royal Canal to Dublin. 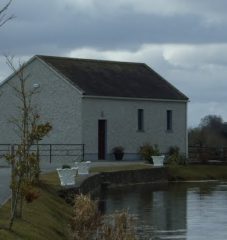