As we near Longwood, we cross over another large aqueduct with three arches spanning the wide blue River Boyne. It begins to rain again; a right downpour and we all try to find shelter under bushes and hedgerows as we settle down for the night. Mr Robinson tells us to be ready to leave early in the morning, for he will have no laggards. Every bit of me is soaked and I have two big blisters on my foot. Mam burst one of them, which really hurt.

There is a near full moon and I watch as some ragged looking men appear in the dark and creep over to canal wall. It is very strange because they seem to be boring holes in the stone which would surely make the water leak.

Thomas and I are curious and watch them. Uncle William gets up and talks quietly to one of them.

‘Things are so desperate that at night in secret the men come and bore holes in the side walls of the canal and burrow them out and damage them so that they will all get hired for more work repairing the damaged parts of the canal tomorrow,’ he explains. ‘For leaks and holes must always be repaired.’

‘What if they are caught?’

‘They would certainly face prison or transportation or worse. I suspect that they are brave Ribbon Men, fighting not only for their own families but for poor tenants and those in need.’

In the morning as we pack up, a few men appear and the foreman sets them to repairing a section of the canal.

The Ribbon Men nod at us as we pass.

‘Move on boys,’ Bailiff Robinson shouts at us, as I put my sore foot back into my shoe.

History: Ribbonmen, secret societies and the impact of the Famine on Irish Protestants

You may catch a glimpse of the Ribbontail paddlers canoe club taking to the water at Longwood harbor and marvel at the Boyne Aqueduct and Viaduct.    Further along after the Harbour is Ribbontail pedestrian bridge. Longwood Village Green is 1.5 km stroll from Ribbontail Bridge, along a peaceful laneway. Longwood  is a lovely tranquil irsh town.  Castlerickard Church & Cemetery in Longwood are home to the Swift family vault. Ribbontail Footbridge and country lane were built to bring Mass goers to Church in Longwood. Likely named after the Ribbonmen as local folklore holds that Ribbonmen congregated around the bridge when they were active in the area in the 19 th century.

The Ribbon Society, like the Molly Maguires of Ballykilcline, was principally an agrarian secret society , whose members consisted of rural Irish Catholics .The society was formed in response to the miserable conditions in which the vast majority of tenant farmers and rural workers lived in the early 19th century in Ireland. Its objective was to prevent landlords from changing or evicting their tenants. Ribbonmen also attacked tithe and process servers, and later evolved the policy of Tenants’ Rights. The existence of “ribandmen” was recorded as early as 1817. The name is derived from a green ribbon worn as a badge in a button-hole by the members.

Depending on the district, the society was variously known as the Fraternal Society, the Patriotic Association or the Sons of the Shamrock. The Ribbonmen’s organisation was similar to that of the Whiteboys or the Defenders of earlier periods. They were organised in lodges, and during the 1820s were in contact with certain organisations of Radicals in England.

The ideology of the Ribbonmen supported the Catholic Association and the political separation of Ireland from Great Britain, and the rights of the tenant as against those of the landlord. The Ribbonmen were involved in violent (and sometimes deadly) riots with the Orange Order in the north of Ireland, and elsewhere used violence to resist paying tithes to the Protestant Church of Ireland .

LONGWOOD POET – LIAM MC DONNELL, penned a poem entitled “Strokestown Exodus”  while watching the 2017 Famine Walkers pass on the Longwood stretch of the Canal, pondering on what his ancestors might have thought of our Missing 1,490 as they trudged the very same path some 170 years before. Read it here.

Clonard Heritage Trail- Hill of Down 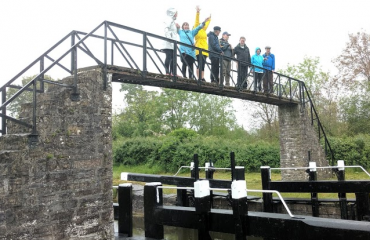