My name is Daniel Tigh. I am 12 years old. In May 1847, the worst year of the Great Irish Famine, I walked this path from Strokestown to Dublin heading for a ship and in hope of a new life in North America. Follow in the footsteps of my story which is marked by 30 pairs of Bronze Shoes along the National Famine Way– now a 165 km accredited trail.

The next morning we set off again crossing the biggest bridge that I have ever seen. It had five big arches that span wide across the beautiful River Inny.   Martin  Cox told us it is called an aqueduct. We all looked over it to see if we could see any fish to catch, for we were starved, but they shouted at us to hasten up. Patrick Quinn and Thomas and I spotted a few otters, their sleek heads diving down into the water below to fish and hunt.

At Ballynacarrigy Harbour we all watched as across from us a tall winch crane lifted heavy loads of grain from the nearby corn store and sacks of barley and lifted them on to a waiting barge.

A few soldiers with their guns were lined up along the side of the barge to guard it.

‘Where are they taking those sacks of grain?,’ I asked my uncle.

‘Likely to Dublin and then on to Liverpool to feed the people of England, while our own go hungry,’ he said angrily. ‘The authorities have refused to stop exports of food.’

The town was busy and people ignored us as they went about their business. There was big Canal Hotel, on the water where the rich and fancy merchants and lawyers sleep in fine feather beds.

‘Get out of my way I need to get to court!’, roared a lawyer, nearly knocking poor Catherine over in his rush to get on a barge that would bring him to the Assizes Court in Longford.

Someday when I get older I am going to stay in a hotel.

History: The Famine in BALLINACARRIGY

You are now in County Westmeath, a county at the centre of Ireland, where Ireland’s Ancient East meets Ireland’s Hidden Heartlands. With its sparkling lakes, breathtaking landscapes, vibrant culture and rich heritage, your visit to Westmeath will be unforgettable. Learn more at  www.visitwestmeath.ie

Ballynacarrigy was largely established in the mid-18th century by the Malone family of Baronstown, who intended to create a linen industry in the area. As  the linen trade failed to thrive, Ballynacargy primarily owes its existence to the arrival of The Royal Canal which opened in 1817. It takes its name from the Gaelic “Baile na Carraige” means town of the Rock.

The arrival of the Royal Canal to Ballynacarrigy circa 1810 led to a period of rapid development and much of the town dates from this period. The lock-keepers cottage beside the lock-gate is typical of the houses built by the Royal Canal Company in the Ballynacarrigy area and the harbour still features an impressive canal hotel and commercial stores built circa 1810 with the nearby remains of a cast-iron heavy goods crane. In 1845, the population of the village was 500 people, living in 63 neatly built, slate-roofed houses. Ballynacarrigy was one of the 26 District Electoral Division of Mullingar Poor Law Union, but was too far from eastern Westmeath and Mullingar to benefit significally from construction of the Midland Great Western Railway. The main source of public work during the Famine was drainage works on the River Inny and creation of artificial lakes. Life for the landless classes was precarious as 25% of the crops were sown on annually rented, con-acre land and 38% of the labourers lived in one room hovels. There were minor famines in the area in 1839 and 1841, particularly effecting the labouring classes during the summer months as they awaited the potato crop. In 1846 local police warned that all the potatoes were gone and the local relief committee noted that dysentery was prevalent due to the badness of food. It was also reported that local meal dealers were engaged in price fixing and that turnip-minding houses were being erected by some larger farmers to protect their crops from the starving poor. By 1847, 39% of the population were reliant on soup kitchens and the following year there was a drastic 83% reduction in the acreage under potato. Between 1845 and 1850 the population of the area declined by 50%. In the aftermath of the Famine the graziers consolidated their holdings and emerged as the dominant social class and there was a corresponding 33% decline in smaller holdings between 15 and 30 acres, as emigration from the area continued apace.

A particular and striking source of folk memory was collected in Ballynacarrigy from the Irish Folklore Commission Schools Collection. It can be found here:

Sir John Piers, lived in a house nearby which has fallen into disrepair, and which was allegedly the inspiration for Maria Edgeworth ‘s Castle Rackrent 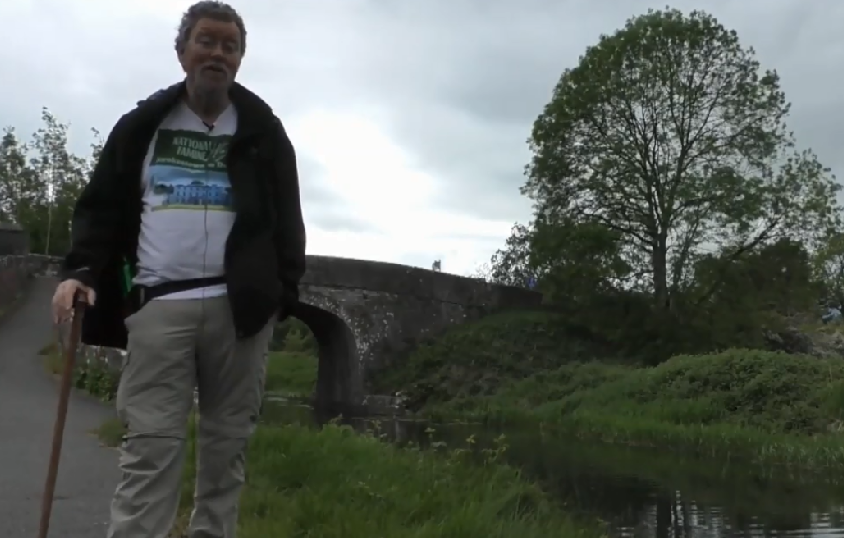