I was glad to leave the busy town and get back on the canal path. Thomas and I watch two butterflies flutter in the sunlight and overhead high in the leafy trees could hear a pair of wood pigeons who have somehow managed to survive and make a nest.

Da showed me how to use a sling and stone to try and catch a fat woodpigeon in the woods for Mam to put in the pot, but soon near us all the woodpigeons had gone.

We slow down as we pass a graveyard in Kilpatrick, for two men are there with shovels busy burying the dead. They have a cart piled high with bodies and Uncle William said they needed to bury them quickly in the earth and have a trap coffin to use. ‘A what ?’, I said. ‘Hush Daniel, the little ones. It’s a coffin with a hinged bottom which opens to drop the poor soul into the grave and can be used again and again. More dignity than what those in the ditches in Tarmonbarry got.’ I appreciate the way Uncle William treats me like a grown up.

Likely many had died of fever like poor Father had. It was a terrible sight for most of the dead had little clothes and only a blanket flung over them. Mam and the women began to cry. I put my arms around Catherine for she looks like a little white ghost. ‘I miss Da,’ she whispers.

Coolnahay Harbour, at Lock No. 26 was constructed in 1809.  It is a picturesque little harbour and  renowned beautiful picnic spot . Coolnahay is the western extremity of the summit of The Royal Canal.

Perhaps our Missing 1,490 rested here awhile. Meet the Christie / Crinnegan Family, keepers of the Lock since 1817. Tea, scones, history & folklore, in this idyllic setting can be arranged by appointment only – call 087 7942452

One of  local MP’s in this area in  May 1847 was Hugh Morgan Tuite of Sonna in nearby  Ballinacarrigy. He was first elected to Westminister as a supporter of  Catholic Emancipation in 1826. Tuite was regarded as a very good landlord and was resident  on his estates. “Always at home like Tuite of Sonna,” was a local saying.

A few kilometers past Coolnahay Harbour, on the bank opposite, the next pair of Bronze Shoes you can see the site of:

Kilpatrick is it site of a cholera graveyard dating from 1832, although an earlier graveyard many have existed on the site. Cholera first appeared in Ireland in March 1832, having spread from England and Scotland into the ports of Belfast and Dublin before making its way rapidly across the country. It struck fear into the heart of society as it cause was unknown and its effects deadly – both rich and poor were often struck down within 12 hours of contracting the disease.

Some communities attempted to prevent cholera from entering their communities by disrupting travel, including the cutting canal banks to prevent the passage of boats as was reported on the Grand Canal outside Tullamore in June 1832. Individuals who attended wakes were vulnerable to the contagion. The local board of health in Mullingar faced resistance when attempting to introduce emergency burial regulations in September 1832 and there were calls for protective escorts for the cholera dead as burials in regular graveyards proved controversial. It was also reported to government that the building selected as a temporary cholera hospital in Mullingar by the Board of Heath was unsuitable and that the County Infirmary be used instead.

Cholera struck again in April 1849, the worst of the Famine years in Mullingar, as the overcrowded town was again hit by a cholera outbreak, contributing to more deaths in 1849 than in previous years. Though not directly caused by famine conditions, the disease hit the poor, unsanitary and overcrowded area of Cabbage Street and it’s weakened inhabitants hardest. It is more than likely that victims of this later epidemic were also buried at Kilpatrick.

Folklore of the time cites the adage: ‘ The Cholerea struck everyone, the Famine only struck the poor !’

Echoes of our 2019 Coronavirus pandemic abound.

The canal was completed to Coolnahay by 1809, but by this time the company was heavily in debt. The small surplus revenue coming in from the part of the canal that was operational was insufficient to pay the interest on the debt let alone continue work on the canal. In addition,  controversy had arisen with the Grand Canal Company about the line the canal was to follow to the Shannon. Any deviation from the line actually authorised by parliament, which threatened the trade on the Grand Canal, was strongly resisted by this company. Finally, the government was asked to intervene in the dispute and this led to a decision to inquire into the financial affairs of both companies. It became obvious that the Royal Canal Company was no longer in a position to complete the canal and so it was decided that it should be dissolved and the canal completed using public funds. The government felt that it would be an even greater loss to the country to leave the canal in an unfinished state after so much public and private money had been invested in the scheme. In 1813, the Directors General of Inland Navigation took over control of the concern with instructions to complete the canal to the Shannon.

As we approach Mullingar, it is worth mentioning Westmeath’s connections with Jonathan Swift, especially with regard to the etymology of Lilliput – one of two fictional, fantastical islands visited by Lemuel Gulliver in the satirical novel. Lilliput is, of course, supposedly named after the real area of Lilliput, located on the shores of Lough Ennell near Dysart, Mullingar. Throughout his life, Swift – the Dean of St. Patrick’s Cathedral in Dublin – was a regular visitor to Westmeath, often as a guest of his good friend, George Rochfort of Gaulstown House.

During one of his sojourns in Westmeath, Swift is said to have visited the Dysart shore of Lough Ennell. One day, while on a boat on the lake, he spotted a number of people walking along the opposite shore, and being so far away, they appeared tiny to his eye. It is at this moment that Swift came up with the idea of the Lilliputians – the pint-sized race of people at the centre of Gulliver’s Travels .

Such was the success of Gulliver’s Travels, that shortly after the publication of the book in 1726, locals in Westmeath once again began to refer to the lakeshore as Lilliput, as it is called to this day. Physically, Swift identified Lilliput and its neighbouring island, Blefuscu, as being situated in the Indian Ocean, not far east of the Indonesian island of Sumatra. But spiritually and conceptually, we are fortunate enough to say, the origins of Gulliver’s Travels go back to the shores of one of Westmeath’s great lakes. 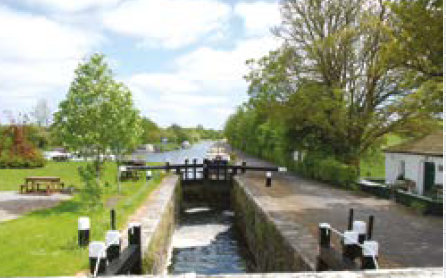