My name is Daniel Tighe. I am 12 years old. In May 1847, the worst year of the Great Irish Famine, I walked this path from Strokestown to Dublin heading for a ship and in hope of a new life in North America. Follow in the footsteps of my story which is marked by over 30 pairs of Bronze Shoes along the National Famine Way – now a 165 km accredited trail. www.nationalfamineway.ie

As we neared Mullingar, we soon saw big gangs of men with their spades and shovels and picks laying miles of heavy train tracks for the railway from Dublin. The clang of their shovels rang out as they worked.

‘That is the future they are building,’ said Uncle William, watching them. ‘Forget barges and horse and coaches. It will be Mister Dargan’s Railway and the like that will change this country.’

All along the banks of the canal there were encampments of mud huts and rough shelters where the railway workers and those who had come to the town in desperate need of food and work lived.

Mother told us to keep well away from the men and their filthy camp because of the sickness.

After we passed the lock, there was a small gate with the name Paradise Gate the led up to the back of the town’s cathedral.

Mr Robinson told us that we would rest here for the night for the women were exhausted and told him they would not walk another step of the Canal Way without food and sleep, as they all sat down on the ground feeling safe in the shadow of the Cathedral.

At our half way mark, Mullingar is a large and vibrant Midlands town with lots to see and do.

The Canal loops around Mullingar in almost a horseshoe shape, with a number of entry points to the town.

In 1847, the railway was being completed to reach here. The turnstile to the right of the Bronze Shoes leads to the Cathedral via Paradise Gate, where there is a 200m path to Mullingar Cathedral.

The Cathedral of Christ the King is constructed in the form of a basilica. It has twin towers and a dome. The  Renaissance style Cathedral opened in 1936, and is the seat of the Bishop of Meath. Inside, visitors can pass through a museum that contains many historical artefacts and models of the area’s church buildings from the seventeenth century to the present day.

Belvedere House Gardens & Park, on the outskirts of Mullingaar, consists of The Victorian Walled Garden, The Enchanted Glen and The Parklands with woodland trials through the ancient wood. The estate comprises one hundred and sixty acres of parkland with six kilometres of magnificent woodland and lakeshore walks, including the Narnia Trail. Several follies adorn the landscape including Ireland’s largest folly, The Jealous Wall.

Please note a small section of this loop is on a busy road, so do take care.

An essential 3 km detour   takes you by the remains of a large-scale former union workhouse complex, one of the best surviving examples of its type in Ireland. This workhouse built c. 1841 is largely intact, complete with its foreboding original entrance door.

It was built on the site of a quarry, in order that the unfortunate ‘inmates’ could work long days breaking stones.

Due to severe overcrowding, an auxiliary workhouse was built further along the canal for old Women and Children.

Part of the complex is still in use as St Mary’s Hospital.

Increasing numbers of destitute people preferred to camp along the canal towpaths instead of trying to access the overcrowded workhouses.  The “Westmeath Guardian” newspaper urged the Canal Company to remove  “these abandoned wretches” from the area because they were performing “unmentionable abominations”.

A little further on is the Workhouse Famine Graveyard, one of the best preserved in the country with its cut stone entrance and wrought iron gates. It is believed that the Graveyard site was much larger in the nineteenth century, as bodies were found when the nearby commercial park was being built.  It is a highly evocative site now in the care of a local committee which holds an annual devotion there each June.

Professor Christine Kinealy reflects on the legacy of the Great Hunger in the Mullingar Famine Graveyard.

The Graveyard is on the Canal Feeder or Supply line. Mullingar is the highest point on the canal and this 3.6 km supply line leads directly from Lough Owel, being its main supply of water. There are sometimes issues with the water level in the canal due to the increased demand for the town water supply, as well as the growing fish farm that draws its water supply from the supply line. It can make boating on the canal difficult and Waterways Ireland and Westmeath County Council are engaged in addressing this issue.

After visiting the Graveyard the loop follows the supply line directly back onto the Canal, where you follow the North Bank to the next bridge, and then cross back over to rejoin the main trail.

There were reports of large encampments along the banks, of people pouring in from the Western Counties, desperately looking for work on the Railways. Local folklore speaks of 14 or 15 people in some mud huts and occasions when mud huts simply collapsed around whole Families, effectively becoming their Graves.

Mullingar Jail was reputedly overcrowded at this time with people committing crimes in order to be jailed and to get food and shelter.

The Meal Reports record the rows that raged between Mullingar and Longford in relation to the location of the Meal Depot.

The canal harbour complex at Mullingar is extensive with two harbours, divided by Scanlan’s Bridge, a dry dock for barges built in 1806, a boat slipway and associated corn store. In 1848, in the midst of the Great Famine, the canal’s importance as a transport route was challenged by the arrival of the first trains to Mullingar. Passenger traffic on the canal ceased immediately but freight trade continued until the mid twentieth century.

Prior to 1848 the terminus of the Midland Great Western Railway from Dublin was at the Hill of Down near the Meath/Westmeath border. The construction of the railway line to Mullingar between 1846 and 1848 was a god-send for the inhabitants of the Killucan and Kinnegad area, as it provided work for up to 2000 labourers. This manifested itself in a relative lack of demand for famine relief in the eastern part of Mullingar Union during those years, despite the failure of the potato crops there. It is not surprising that reports of the arrival of the first train into Mullingar on 2nd October 1848, also note the general indifference displayed by the townspeople, despite presence of two local landlords GA Boyd Rochfort and Sir Percy Nugent MP on the train, as it marked the end of these vital works. In June 1849 work commenced on the railway line from Mullingar to Athlone.

The Mullingar to Athlone Railway has recently been repurposed as a walking trail – The Old Rail Trail.

Note:   The Tourist Office is located at the Market Square in the centre of the town.  Market Square is also the location of a Statue dedicated to Joe Dolan, a Mullingar native and beloved Irish entertainer and pop singer for over six decades from the late 1950’s until his death in 2007. 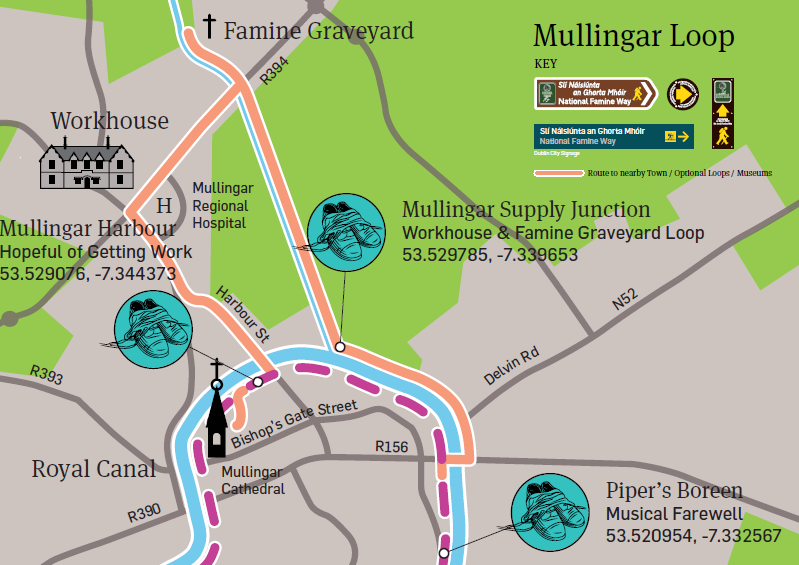