My name is Daniel Tighe. I am 12 years old.  In May 1847, the worst year of the Great Irish Famine, I walked this path from Strokestown to Dublin heading for a ship and in hope of a new life in North America. Follow in the footsteps of my story which is marked by over 30 pairs of Bronze Shoes along the National Famine Way – now a 165 km accredited trail.

The day was warm as the huge crowd of us began to fold up our blankets and throw water on our heads and faces to wake up and stretch ourselves for the next stage of our long journey to Dublin.

We were surprised to suddenly hear music. Much to our delight, as we got ready to leave Mullingar, a piper appeared down the lane, and sat by the edge of the bank and began to play the pipes for us.

The sound of the pipes filled the morning air. Their music lifted our hearts. Everyone listened, even Bailiff Robinson and his men, as he played his tunes. Reels and jigs and favourite tunes lightened our spirits. Catherine Anne Gilmartin, Bridget Holden, Marie Madden, Mary Cox and Ellen Sheridan all did a 6 hand reel. It warmed our hearts. We were glad to get such a kind farewell from the Mullingar Piper.

In 1806, the first canal boat reached the harbour at Piper’s Boreen on the south-eastern side of the town. Local pipers gathered along the boreen leading from the harbour to pipe the passengers off the boats. During the Famine years, they also played final farewell to numerous emigrants passing through Mullingar via the banks of the canal.

The Royal Canal Amenity Group erected a stone monument at this location in the 1990s to commemorate and honour the Pipers.

In 1831, Mullingar Poor Law Union had a population of 70,000 with 7000 living in Mullingar. While there was an overall decline of 21% decline in the population of the union between 1841 and 1851, the population of Mullingar actually increased by 32%. This increase was due in great part to a large influx of country people into the cabin suburb of Cabbage Street and 1500 paupers in the workhouses. And in what must have resembled a pitiful site, many impoverished people fleeing the impoverished western districts crowded into temporary encampments along the canal bank.

Overcrowded, unsanitary conditions and starvation facilitated the spread of diseases. The two deadliest diseases in the town were dysentery, caused by the change in diet from potatoes to raw turnips and maize, and two forms of fever, relapsing or yellow fever and black or typhus fever, both spread by lice. April 1849 saw the return of cholera, a fatal bacterial infection spread through contaminated water sources. In 1848 with Mullingar Union facing bankruptcy, the union administrators decided to discontinue outdoor relief and reserve the workhouse for able bodied paupers. A series of auxiliary buildings were sourced for women, children and the infirm. These included a corn store near Moran’s Bridge (the Dublin Bridge) into which 100 infirm females were placed, as well as Hevey’s disused brewery on Linen Street, which housed 1000 children in December 1848. Rathconnell House and its converted stables, two miles from the town, was acquired for infirm males, as was an overcrowded byre-type farmhouse at Irishtown. For most entry into the workhouse was a last resort. When the new regime was introduced, 600 able bodied paupers refused to enter the main workhouse and thereafter nearly all who entered did so in a ‘dying state’. Mullingar Gaol, became a workhouse in all but name with reports of some people committing petty crime in order to access the better rations available there – built for 150, it housed over 300 after 1848.

Pipers’ Boreen is said to be named after a famous eighteenth-century maker of pipes, Keena, who lived nearby.  This site has  been connected with Uilleann Pipes and Pipers over the centuries. It is renowned in folklore for its Pipers who during the Great Famine sat by the banks of the Royal Canal playing a final farewell to the stream of emigrants heading for Dublin. Perhaps they played for our 1,490 and lightened their hearts a little as they trudged on towards the city. You find a monument nearby to the Pipers erected by the Royal Canal Amenity Group.

The Uilleann Pipes were inscribed in 2017 on the Representative List of the Intangible Cultural Heritage of Humanity.     This important global accolade reflects heritage cultural practices that are considered to enrich all of humanity.   Uilleann piping is a musical practice which uses a particular type of bagpipe (known as the ‘uilleann’, ‘Irish’ or ‘union’ pipes) to play Irish music.

UNESCO has now agreed that Irish Uilleann Piping – often referred to as “The Sound of Ireland” – merits this recognition. As a result, the distinctive Irish musical art-form joins such other cultural expressions as the Argentinian Tango , the Armenian Duduk and its music , and the Baul songs of Bangladesh.

Older than Guinness, the Uilleann Pipes descend from an instrument introduced in the 1740s and were known as “The Irish Pipes”. It is a sophisticated instrument that provides more musical possibilities than any other type of bagpipe due to three different streams of sound.  Uilleann Piping had declined in the nineteenth century, but has since been successfully revived.

It is now a thriving art form in both Ireland and worldwide, where it is celebrated in 50 countries and on six continents. There are more than three thousand Uilleann Pipers throughout the world, playing Irish music on this Irish instrument in dedicated clubs throughout Europe and in North and South America, Australia, New Zealand and Japan.

Note:   The Tourist Office is located at the Market Square in the centre of the town.  Market Square is also the location of a Statue dedicated to Joe Dolan, a Mullingar native and beloved Irish entertainer and pop singer for over six decades from the late 1950’s until his death in 2007.   Musicans – There were quite a few musicians in this area.. There was a famous maker of pipes in the  eighteenth century called Keena which contributed to the development of Uilleann Pipe  playing in this location 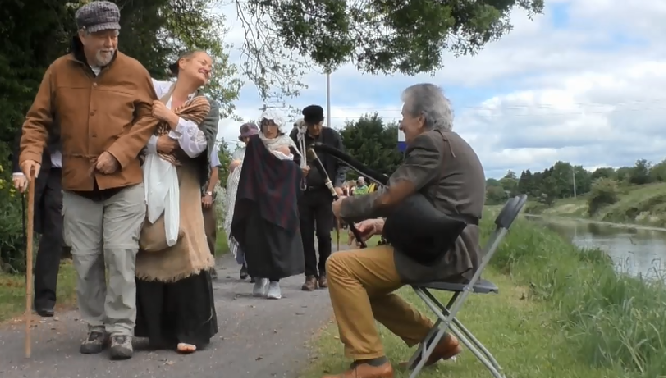