We were all feeling better after the music and a night’s rest and Thomas and I and a few of the boys ran on ahead. We could see frog spawn at the water’s edge and soon heard a croaking in the rushes as we searched for frogs.

‘Daniel there’s two frogs,’ shouted Patrick Cox and Henry Holden, excited as we bent down at the water’s edge to try and catch one.

Hugh Murray knelt at the water edge to try and reach one of them as it hopped on to a mossy stone.

I was trying to beat him to it, when suddenly I felt my foot slip in my new shoes and I stumbled into the cold water. Luckily it was shallow there near the rushes and all the boys laughed and teased me as I sat up and the water dripped off me.

‘What are you up to Daniel?’, smiled my uncle coming up to me, and seeing the wet state that I was in.

‘I took a swim in the canal,’ I grinned, pulling off my wet jacket.

‘Don’t’ let the bailiff and his men see you like that,’ he warned, passing me a bit of blanket to quickly dry myself with. ‘Stay hidden and walk in the middle.’

I was barely dry when it began to rain. The sky black and dark as it poured down on us.

The mood was quiet and somber now as the 1,490 marched on.

History: Emigration from the midlands and the Mullingar Workhouse during the Famine

Alongside Neads Bridge at this location is a Traditional Public House built c.1900. Check ahead for opening hours.

About 3 km further along the canal is Riverstown, a tiny ‘Village’’ with a quaint atmosphere comprising of  a traditional pub, shop and much more. In the village can be found the rustic building of a long closed railway station.

Local historian Ruth Illingworth talks about emigration from the midlands and the Mullingar Workhouse during the Famine:

Migration Then and Now:

The main national story in May 1847 was the death of Daniel O Connell. The Viceroy of Ireland also died that month. A General Election was about to be called. There were reports of major food riots in parts of England and Scotland and also in Spain. In Black ‘47, everything was becoming increasingly hopeless, for close to half of our population.

Emigration was desperately grasped at by hundreds of thousands which was to create what became known as ‘chain migration’ throughout the 1850’s to 1890’s, as generation after generation worked hard, saved and sent home ‘passage money’ or ship tickets to siblings, children etc. Eventually, in the latter half of the nineteenth century, the end result was close to two million of our people leaving our shores.

In May 2015, on the second day of the very first commemorative walk, news reached the walkers that a ship had over turned in the Mediterranean Sea drowning almost 600 people.

The group walked on in silence, contemplating how close to 600 of our 1,490 would not survive their journey either and how they would meet a similar watery grave.

‘Our past was their present’ and it simply isn’t good enough. How can the mode of transport for ‘escape’ become almost more dangerous than what one is fleeing ?

The National Famine Museum at Strokestown Park House has always connected with modern day Famine, as the Museum Founder Jim Callery stated: ‘there is no point in having a ‘dead’ museum. One must try to learn some lessons,  shed some little light on current day conditions.’

This connection is important to us and we have run joint projects with the Refugee & Asylum  Reception Centres in Ballaghadereen and Athlone. In 2019, a large group of asylum seekers joined us both at the National Famine Way Canadian Wake, the evening before we set off on the walk, and the again a few days later for a stretch of the National Famine Way around Mullingar.

We work, on an ongoing basis, with New Horizons – Athlone Refugee & Asylum Seekers Support Group and after the above event we received this email from one of their lead co-ordinators, Gerry Callaghan:

On behalf of my asylum-seeking friends, New Horizon volunteers and myself I’d like to say a very sincere thanks for the welcome to the National Famine way walk last week.

The Canadian wake was lovely,  People came and talked and made us feel welcome. Asylum seekers suddenly saw their own stories reflected in the tales from 1847.

The Mullingar event was truly superb. Asylum seekers usually feel very isolated and marginalized in Irish society. To walk into a group and be greeted with music and applause was something that will be remembered for a very long time.

As for myself I’d like to say thanks for the memories, the stories and the blisters!

Then there are those occasional days when we ‘Walk in fields of gold’.

Gerry and all the New Horizon gang

See the  Famine Walkers below engaging with local school children from the Downs who have come out in costume to greet them. 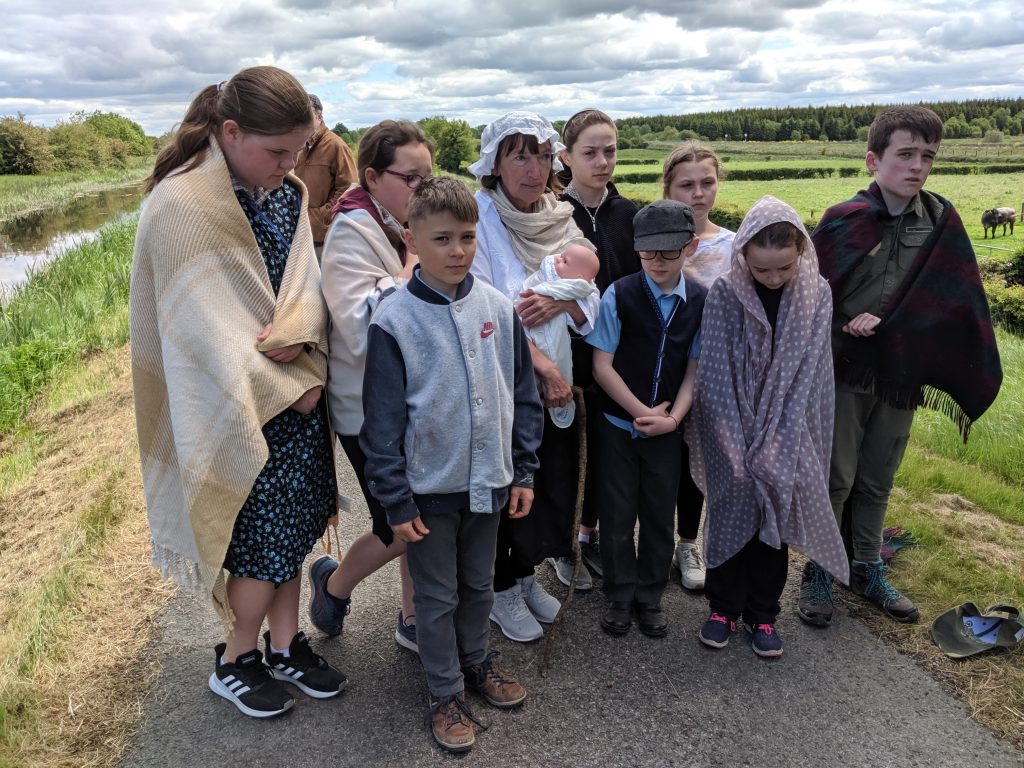