An adventurous 165 km cross country trail that follows the Royal Canal as it weaves through country lanes, villages, towns and city – can be done in sections over time or all at once – as you choose. Follow the story of Strokestown’s Famine Emigrants as our interactive bronze shoe sculptures creates a thought provoking experience, on this commemorative cross country walk. The trail is topped and tailed by two iconic museums – “The National Famine Museum” at Strokestown Park and “The Jeanie Johnston Famine Ship” / “ EPIC – Irish Emigration Museum” at the Dublin end.

My name is Daniel Tighe / Tye, I am 12 years old, in May 1847 the worst year of the Great Irish Famine, I walked this path from Strokestown to Dublin heading for a Ship and in hope of a new life in North America. Follow in the footsteps of my story through the 30 pairs of Bronze Shoes along the National Famine Way.

As we journeyed on the rain lifted as we neared the fine harbour and bridge at the Hill of Down.

We heard the clang, clanging and soon see an enormous group of hundreds and hundreds of men and boys, backs bent, working on building the new railway station and laying the heavy tracks for the railway line which will soon open. It is hard labour with their picks and shovels but they are getting paid and need the work to feed their families.

There are fine horses being watered and fed, better than ourselves, before being harnessed to pull the Fly boats with their passengers along the canal.

As we walk on the sun comes out and we pass a huge field of yellow buttercups. Catherine and a few of the little girls laugh with excitement as they run through them and pick some.

Life in this part of the country is not as bad as it is back in Strokestown it seems.

On day four of the Walk, two amateur historians of the Hill of the Down, PJ Massey and Pauric Masterson, urged us to meet with 94-year-old Betty Doyle. Part of the story of the famine lies in a repository of local lore, and the walk, in passing where so many passed, is facilitating a conjoining of past and present. In a throwback 19th century cottage, a diminutive Betty Doyle, under the coaxing intimacy of Massey and Masterson, tapped a font of lore and poetic register that caught the sentiment of an older generation. 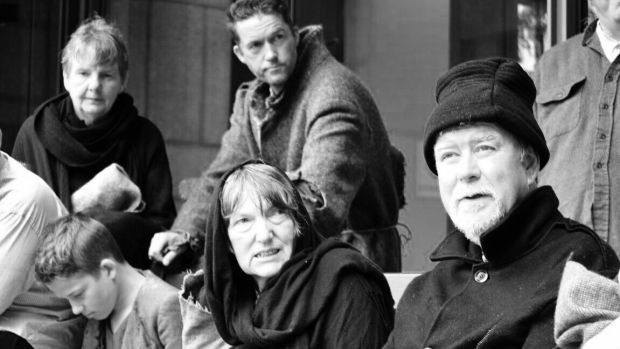 I was mindful of Synge and his time on the Aran Islands with Yeats’s evocation that he put his ear to the floor to catch the cadence of the Irish voice. The most impactful of Betty’s stories was the memory of a “famine barley” which grew in small patches from grain in the pockets of those who had perished. One imagines this moribund harvest, this eerie memorial to those fateful years and to so many unburied dead.

On the return to the canal, we stopped at the gurgling throat of a hidden famine well, dug for 4,000 rail workers. In standing amidst the dappled light, conjecture settled that perhaps it was here that emigrants stopped and worked a while, in a prefiguring of the rail work they would eventually undertake a continent away in the United States.

Betty Doyle’s ancestors suffered through the Great Hunger. In 1847, in the middle of the Great Famine, Midland Great Western Railway line from Dublin was extended to the Hill of Down. The station which was built in between the railway and the pre-existing canal. A number of oral history accounts for the Famine in the area survive in The Schools Collection collected in the 1930s, including references to famine fever in the area and the erection of a wooden fever hospital at Scariff, near Trim. Margaret Hynes from Clondalee, Hill-of-Down was said to be the last person admitted to this hospital with fever. Indian meal stirabout was given out to the poor at Clondalee and a soup kitchen was said to have been set up on the nearby Langan estate at Mount Hevey. Continuing construction of the railway provided much needed local employment and other local relief works included drainage works on the Boyne.